Explosions in Pune: Return to the days of Terror? 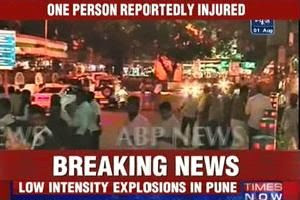 Four coordinated low intensity explosions and recovery of two unexploded Improvised Explosive Devices (IEDs) in Pune in the western Indian state of Maharashtra on 1 August 2012 were enough to bring back the memories of the 13 February 2010 explosion in the same city, which had claimed 17 lives and injured 60 persons. It also ended the 11-month lull of no terrorist attacks in India's urban centres since the explosion on 7 September 2012 outside the High Court in national capital New Delhi.

Initial investigations have focussed on the lone injured person, Dayanand Patil, a 34-year old local tailor, who allegedly was carrying one of the explosives, when it went off. Although Patil's preliminary statements point at his non-involvement in the terror plot, his subsequent interrogation may provide further details.

The Home Secretary R K Singh described the attack as "coordinated", as all the explosions took place within a time span of 48 minutes (between 7.27 pm and 8.15 pm) and within a radius of 500 metres. The Police Commissioner of Pune, on the contrary, has played down the explosions "an act of mischief", and "not one of terror", a position that runs in contrast to New Delhi's position. Home Secretary has said that "a terror angle could not be ruled out since it seemed like a planned attack."

Whether any known terrorist group was involved in the explosions, that took place a day after the new Home Minister Sushil Kumar Shinde took over, is being probed. The terrorists may be linked to the Hindu terror groups, the Indian Mujahideen or any other group with previous experience of carrying out blasts in the country. However, given that the blasts were of low intensity- with an intention to alarm than to kill- the involvement of the major outfits like the Lashkar-e-Toiba (LeT) or its affiliates can be ruled out.

What the explosions, however, underline is that the Indian urban centres continue to remain vulnerable and any person/ group with an intention of creating sabotage and indulging in terror activities, can carry out such acts with little difficulty. Chemicals required to manufacture explosives are freely available in the cities, in spite of the government regulation to limit their availability. The intelligence apparatus remains weak and the security agencies are in no position to prevent terrorist attacks.

It is not clear, for the time being, whether the injured person Dayanand Patil was indeed involved in the attack. His involvement, if any, would speed up the investigations and may actually lead to 'solving' the case in quick time. However, if he was not involved, the investigation, similar to the ones that are still looking into the previous blasts in several other cities, may be prolonged and the case may be difficult to solve.

What would make the investigation difficult is the absence of close circuit TV (CCTV) footages of the blast sites. The story of non-functional CCTV cameras is a familiar one in India. Investigations into the explosions in New Delhi and Mumbai that took place in 2011 have suffered due to the absence of functional CCTVs. In Pune too, 70 CCTV cameras installed by the city's Municipal Corporation as part of its intelligent traffic system (ITS) were out of order at the time of the explosion. The Pune Municipal Corporation had failed to pay the contractor who installed the system and the latter had reportedly stopped the connectivity service since March this year. It appears that even though country has focussed on setting up an ambitious counter-terrorism architecture, the basic requirements continue to elude the attention of the planners.

Former Home Minister P Chidamabarm, who is now in charge of the country's Finance Ministry, had once claimed that the relative safety of Indian cities and absence of major attacks during his tenure, points at the country's augmented capacity to prevent terror. The explosions in Pune falsify such claim.